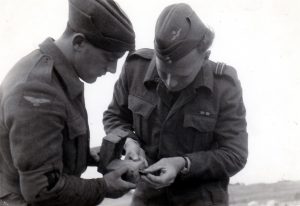 The particular Beach Squadron and the names of the men have not been identified. The airman wears the red brassard with letter ‘E’ on his right arm, identifying him as an Embarkation Assistant. The officer also wears a red brassard, although in his case it is on the left arm. This would be the officers’ version of the brassard which had a metal crown and eagle badge similar to that on his side hat, rather than a letter ‘E’. The officer also wears the Combined Operations badge on the upper arm of his RAF blue War Service Dress and the medal ribbon of the Africa Star. Unusually, he has rank slides on the epaulettes to show his rank of Flight Lieutenant rather than sewn on tapes.